Kubernetes “The JARC way” (I)

This post tries to be post about Kubernetes from the developer point of view, relating Kubernetes concepts with application development. As I always said, the important thing is adquiring knowledge about something and making it yours, In my case, “the JARC way”.

I’m not going to enter in details about how a Kubernetes cluster can be installed or managed but how applications can take advantage of Kubernetes possibillities in order to be scalable and so on.

This post will be a series of several posts where we’re going to go from the concept and theory (but in a “JARC way”) to the real life. I’m not going to enter in details about Kubernetes because the product’s documentation is wonderful and there are already published a lot of books about that. My objective is to try to explain concepts and it applications.

So, I’m going to structure this post this way:

Basically, Kubernetes is a platform where containers run. Think about what it means:

Why Kubernetes is so associated with Microservices?

Basically, a Microservice is an independent component, performing a business capability and usually needs some scalability requirements, given by business needs. And, when a microservice scales, it’s necessary to distribute load among the instances.

Other characteristic of microservices is polyglotism, that means, they can be built using any language or framework. If we package our microservices in containers we don’t need a different server to execute them. We just need a container scheduler.

As I said, Kubernetes is a platform where containers run within an specific scalability rules, and working with containers means that every kind of workload can be executed. So, Kubernetes is the perfect tool for microservices.

Kubernetes architecture could be summarized in a cluster of nodes where workloads are executed. That cluster is composed by nodes (machines) and some of then adquire the role of workers while the rest adquires the role to coordinate workers and, for instance, decide when and where (worker node) a workload has to be executed.

So, Kubernetes architecture could divide in:

Workloads are executed as containers and it implies executing any kind of workload and to do that, it’s necessary to have a set of machines.

Kubernetes is not associated to a specific infrastructure technology. It just needs a set of machines to create its cluster and manage containers on them. It’s possible to install Kubernetes on premise or in cloud.

These nodes are commonly known as workers or workers nodes.

Kubernetes can work with only a node but in the real world, multiple nodes are necessary. The number of nodes depends on, for instance, the number of environments (dev, pre, pro…) or the compute needs that applications, running in the cluster, require.

For sure, you’re wondering how Kubernetes knows in which Pod has to run a container or how nodes are managed. Those kind of tasks are managed by “the control plane”. The Control Plane has the following components:

Components from Control Plane aren’t deployed in workers nodes. They are deployed in other king of nodes called master nodes

Control Plane needs some components in every node in order to manage the cluster. These components are:

Summarizing, working with Kubernetes means that your application must be containerized and this containers will run in some node of the cluster.

I like this image from the Kubernetes main page to show the architecture:

An object in Kubernetes is represented by a YAML file. This file shows how the desired state.

Till now, I’ve not talking about Pods, Services, Volumes or Deployments because I think it was better understand the concept of Kubernetes. From now, I’ll introduce those objects from the use cases

Now, I’m going to identify the main Kubernetes objects that take part from a developer point of view:

There are other Kubernetes objects but I think these are the most important from a developer point of view. This picture summarize the points below: 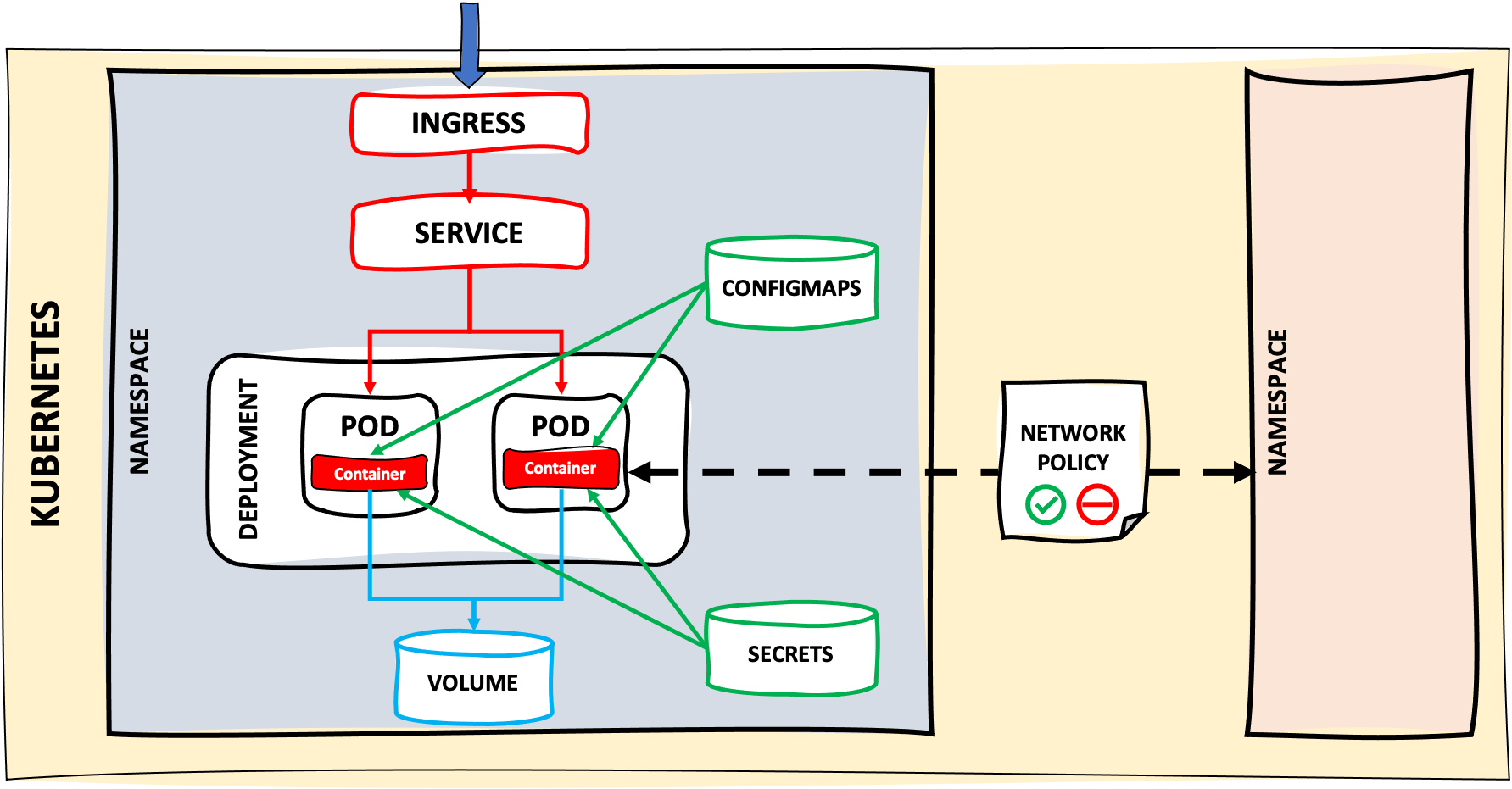 Basic structure of a Kubernetes Object

Every Kubernetes object is defined by four parts:

For instante, this is the YAML associated to a Pod:

Kubectl is the command line tool used to manage a Kubernetes cluster. This tool, behind the scenes, performs HTTP request agains Kubernetes API.

Kubectl sintaxis is normalized. The pattern is:

Aditional info depends on the command executed. For instance, if we want to get the detail of an specific pod, we’ll execute:

I’m not going to explain in detail every command because you can find a really good cheatsheet in the official product’s page but the most common commands could be:

As I said, kubectl executes calls to Kubernetes API. If you want to check how these calls are you can add a parameter to shows “debug” information. For instance, if I execute the command to get pods in the namespace “jenkins” but add the flag “–v=7”:

I see the HTTP request:

How can I have “my local cluster”?

There are some possibilities to create a local Kubernetes cluster to make some PoCs or simply having a quick start.

I can talk about these alternatives that I’ve used without entering into details:

And if you don’t want to have a local cluster, you can use any Cloud solution like Okteto

This is the first post on “Kubernetes - The JARC way”. In the next posts, we’ll see in detail the most important Kubernetes objects associated to development aspects instead of learning each one without more context….